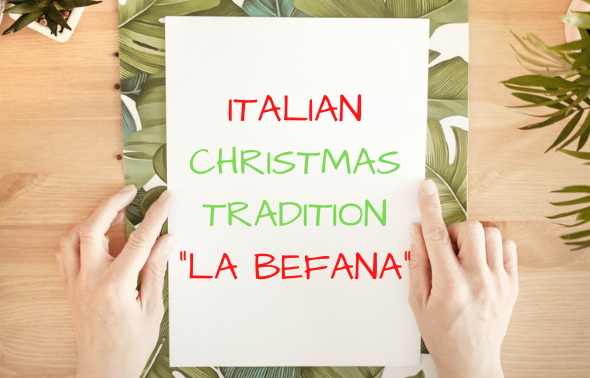 Christmas time in Italy is one of the best times of the year. It is filled with traditions and many celebrations. The Italian festive season is filled with historical, religious, and traditional events, each with a valuable cultural and spiritual lesson or folklore. One of the most popular of these tales is that of the Italian Christmas witch “La Befana.”

From December to January, families, and visitors in Italy get together to celebrate Italian Christmas traditions such as La Befana.

During the journey of the Magi to bear gifts for the Christ child, they visited Befana in Bethlehem to join them. She turned them down.

She soon regretted this decision, got on her broom, and dropped gifts at every child’s house in the hopes of finding baby Jesus.

Today, on the evening of the l’Epifania (day of the Epiphany), Italians believe that La Befana visits all the local children. For those who have misbehaved during the year, she leaves a stocking full of cenere e carbone, which is ashes and coal. Families often place rock candy made black with caramel coloring in a stocking to make it look like a lump of coal!

This fun and exciting tradition has many of the locals dressing up as a witch (strega in Italian).

THE TRADITION OF ITALY’S CHRISTMAS WITCH

As la Befana travels down the chimney to fill a stocking, she threatens to thump children with her broomstick if they try to look at her. It is one of the most interesting ways Italian families get children to go to bed during the festivities of the Holidays!

In addition, in the traditional Christmas story, Santa Claus or “Babbo Natale,” scuffles down the chimney to eat the delicious “dolci” (sweets) before leaving gifts. In the Italian Befana, a glass of wine or “vino” is paired with food to show the witch some graciousness before she leaves on her broom.

The tale of the Italian Christmas witch also dates back to the Neolithic and the Celtic period.

You can enjoy the traditional tales and celebrations of the Italian Christmas witch from December to January.

Now that you know the Italian tradition of La Befana, discover other Italian Christmas traditions!