Are you looking for a list of the top Italian newspapers to practice your Italian reading skills and stay informed about Italian news? Look no further! Below you can find some  of the most important and well known Italian newspapers that will enable you to start practicing the Italian language immediately. 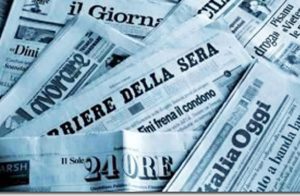 One of the oldest and most famous newspapers in Italy is the Corriere della Sera. It was first published in 1876 in Milan and many important Italian writers and journalists, like Luigi Pirandello and Eugenio Montale, wrote for it. A century later it is still the most read newspaper in Italy. If you have never studied Italian before and think that reading in a foreign language is too hard for you, then look at the online English section here, where you will find interesting news relating to Italian affairs and culture.

Amongst Corriere della Sera’s biggest competitors are la Repubblica, a centre-left political newspaper founded in Rome in 1976, il Sole 24 Ore, which places a specific focus on politics and economics, la Stampa,  founded in Turin and owned by FIAT Spa, and il Messaggero, a paper which tends to be more popular in Rome and central Italy.

Also, a more recent but very interesting newspaper is Il fatto quotidiano, founded in 2009 by Marco Travaglio, who chose the aforementioned title to commemorate Italian journalist and writer, Enzo Biagi, who was accused by then prime minister, Silvio Berlusconi of having used the public television service for political purposes through his TV programme “Il fatto” and hence was subsequently banned from appearing on TV for several years.

Of course, in Italy, sport is also an intrinsic part of the culture so in the list of top Italian newspapers we mustn’t forget the Italian sport newspapers. First of all La Gazzetta dello Sport. This newspaper was first published in 1896, but only two years later, in 1898 decided to change its publishing colour and  started to be printed on pink paper. The rest, as they say, is history.  From 1909 it has led the organization that runs  the Giro d’Italia, the prestigous and single most important annual bicycle race held in Italy. Perhaps now you might understand why the jersey worn by the leader of the general classification of this race is pink! Other very well-known Italian sport newspapers are Tuttosport and the Corriere dello Sport, where you can find the most topical and important sport news, especially those headlines relating to football, the Italian national sport.

As you can see the list of top Italian newspapers is quite extensive, so you only have to choose those that pertain to your particular interests and passions to start practicing Italian in an enjoyable and effective way.

This site uses Akismet to reduce spam. Learn how your comment data is processed.